"They will beat their swords into plowshares..."

While on a recent week-long geology trip through Oklahoma, Texas, and New Mexico, my group had the pleasure of being given a small tour of an interesting little project near Carlsbad, New Mexico. We were driving through some of the dusty backroads around the brine pits and oil rigs to the east of Carlsbad when we reached a dead end with a concrete marker and plaque. 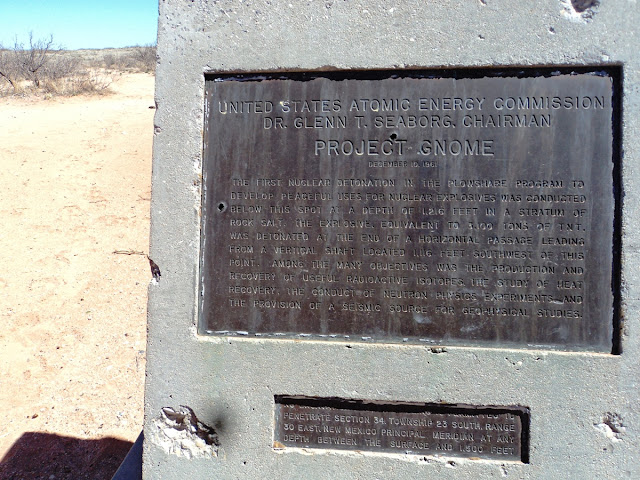 "The first nuclear detonation in the Plowshare Program to develop peaceful uses for nuclear explosives was conducted below this spot at a depth of 1,216 feet in a stratum of rock salt. The explosive, equivalent to 3,100 tons of TNT, was detonated at the end of a horizontal passage leading from a vertical shaft located 1,116 feet southwest of this point. Among the many objectives was the production and recovery of useful radioactive isotopes, the study of heat recovery, the conduct of neutron physics experiments, and the provision of a seismic source for geophysical studies."

Below the spot we were deciding to have lunch for the day, a nuclear device was detonated on December 10, 1961. This detonation was called Project Gnome, part of Operation Plowshare, a program to use nuclear explosions for peaceful projects. We were told by our guide that the distinction between a "nuclear weapon" and "nuclear device" is the intent in which it is used (basically as a weapon or not). This location was chosen because of the very thick salt layers in the subsurface which are known for essentially repairing themselves (since the salt flows somewhat), making salt domes and rocks good for storing harmful materials. 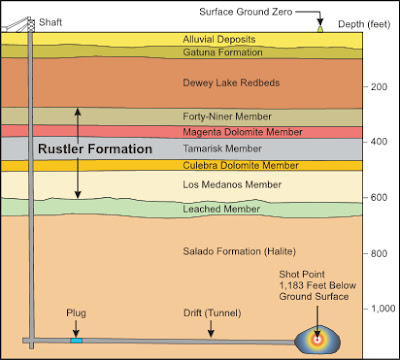 Other than the fact that we were essentially standing about 1000 feet from where a nuclear explosion occurred, my favorite part was the name of the project, "Plowshare Program" or "Operation Plowshare", named so after a verse from Micah 4:3...

"And he shall judge among the nations, and shall rebuke many people: and they shall beat their swords into plowshares, and their spears into pruning hooks: nation shall not lift up sword against nation, neither shall they learn war any more"

The concept of "swords into plowshares", or turning weapons into peaceful tools, seemed very fitting for the project.

While we were touring the site, we were informed that a very small amount of radiation leaked from one of the wells after the detonation, but didn't cause any harm or contaminate any other sites. No radiation has leaked since then, and the area is protected from drilling. This was shown to us to illustrate the potential success of the nearby Waste Isolation Pilot Plant, which stores harmful materials underground (basically, if a nuclear explosion could be contained in the salt rocks, then a harmful chemical storage facility should have no problems). 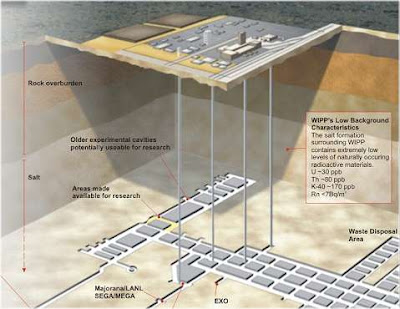 After returning home and reading more about the project it seemed there was much more negativity towards the explosions, and it seemed as if the radiation leak was taken more seriously by the public than the scientific community. Our guide fully supported the Gnome detonation, but on the internet it seemed it had much more negative publicity by the non-scientific community. But I suppose that's how these things tend to be. The guide was extremely knowledgeable about not only this project but almost any geological question we asked him, which biases me towards his judgement.
Posted by Unknown at 2:48 PM