Winter is finally turning to spring Minnesota, and things are melting! My neighborhood's major riverway, Minnehaha Creek, is starting to thaw. I had a day off the other week, so I decided to go for a walk around the creek, which is when I noticed something interesting - it's thawing in a very particular way that crazy river people would notice and get a little too excited about. See if you can spot it: 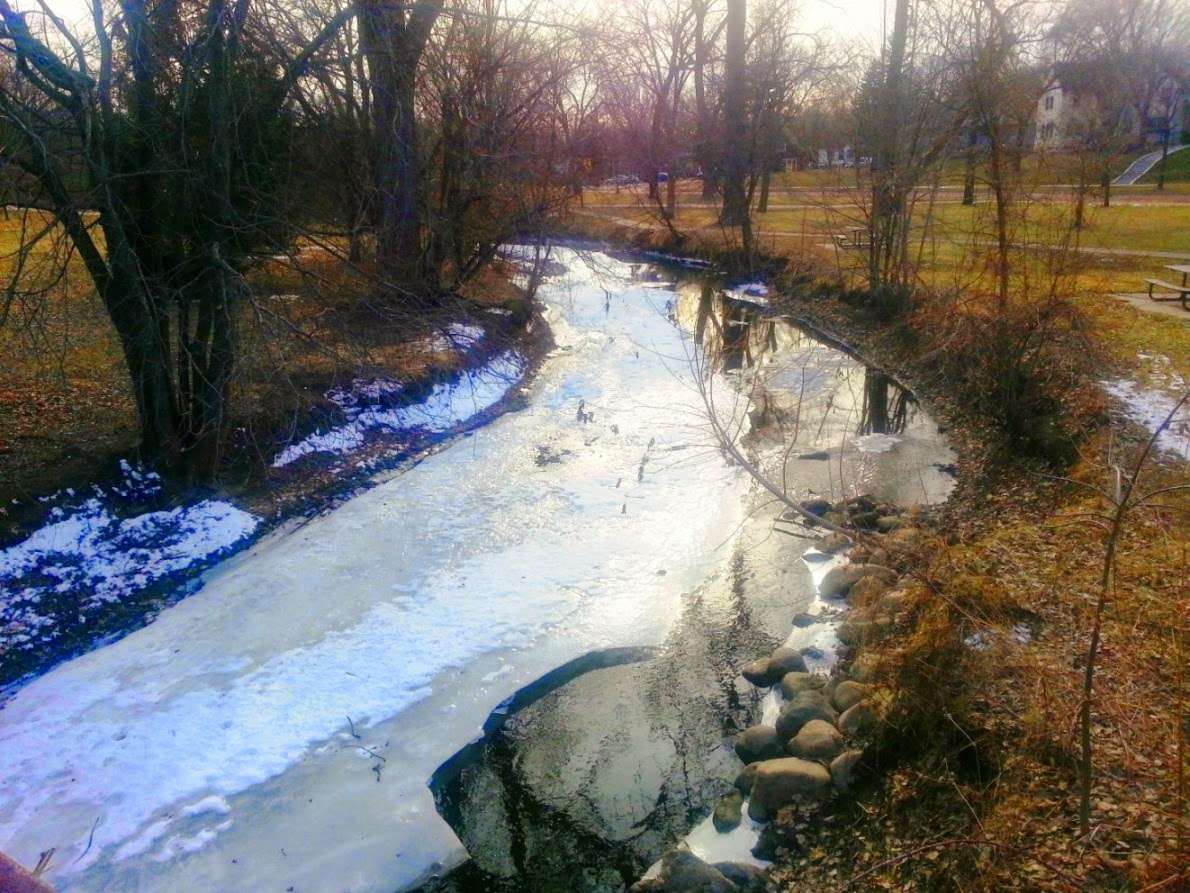 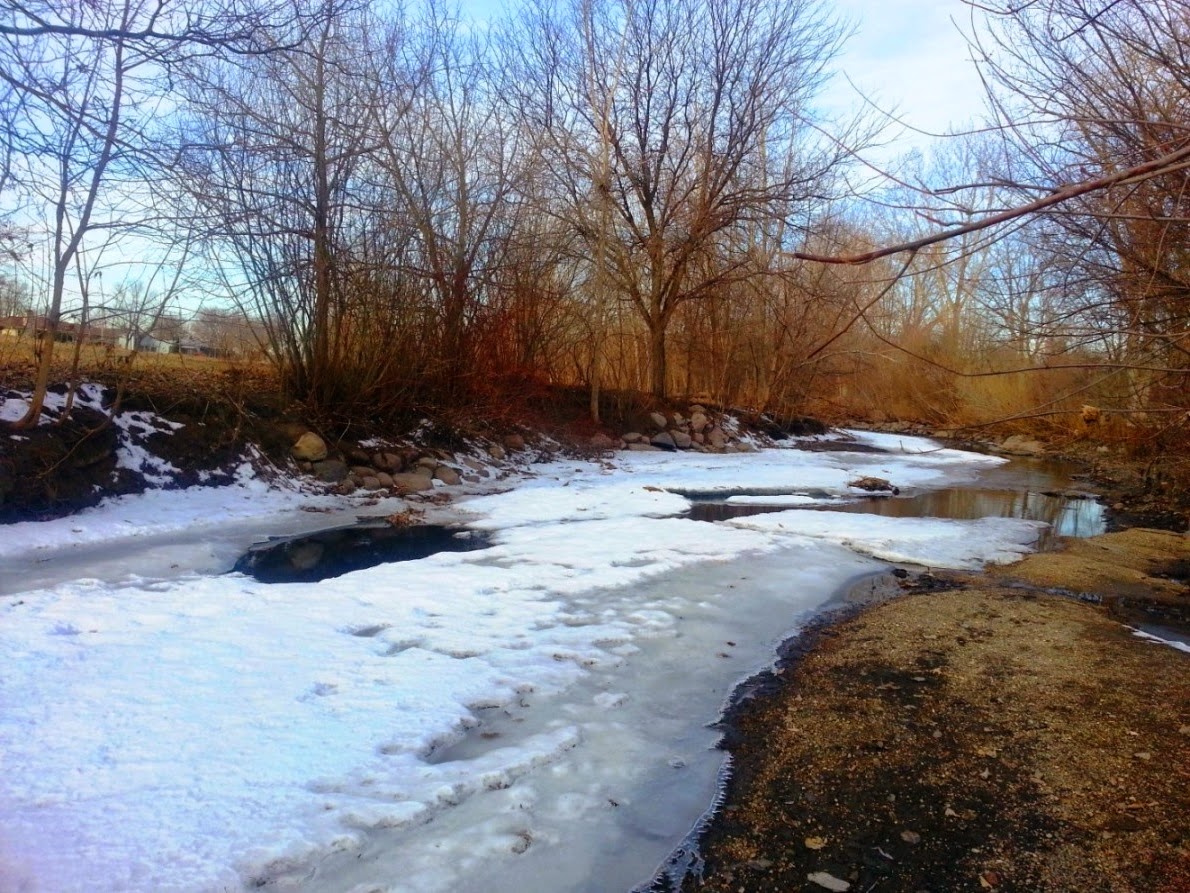 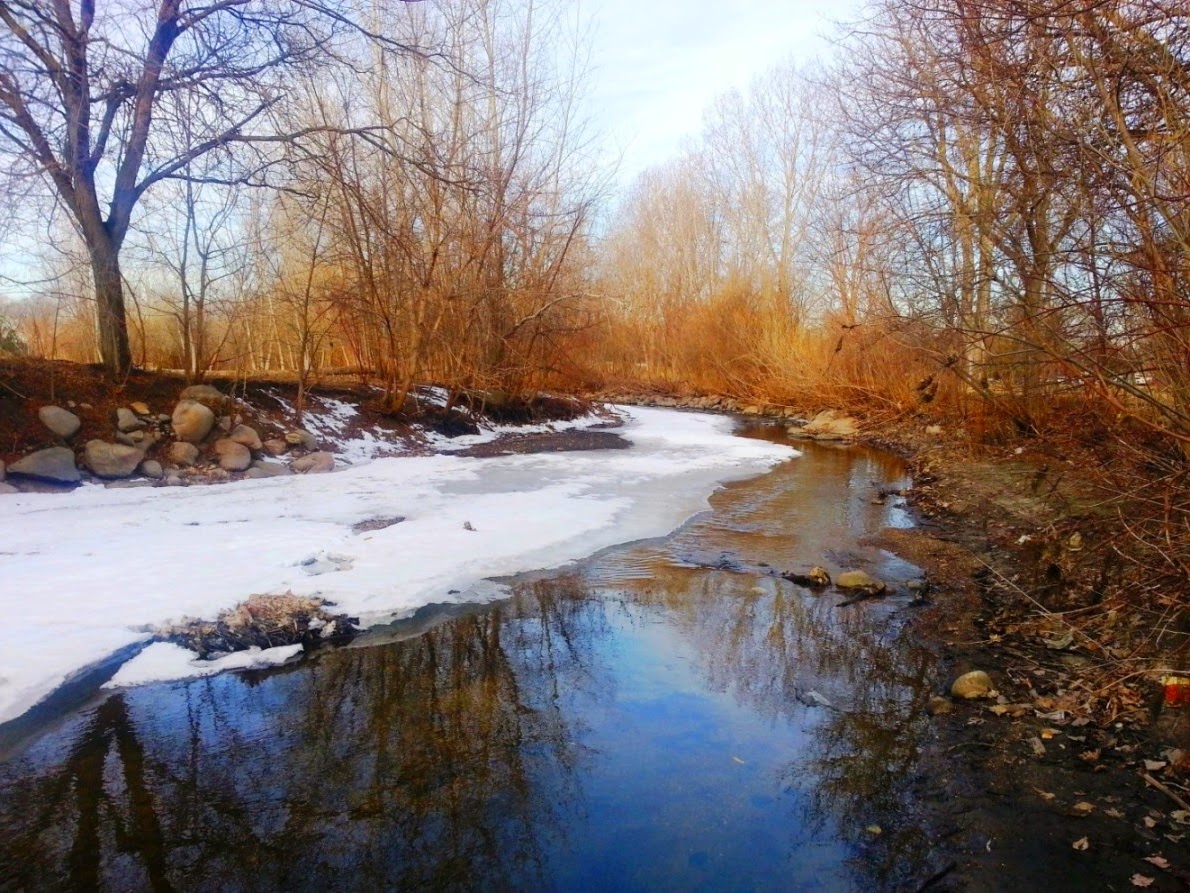 You might notice there is open water on either one bank or the other, which is correct - the ice seems to be melting along certain parts of the stream. This might not seem very significant, but it is! Like most things geological, the fun part is learning "why." 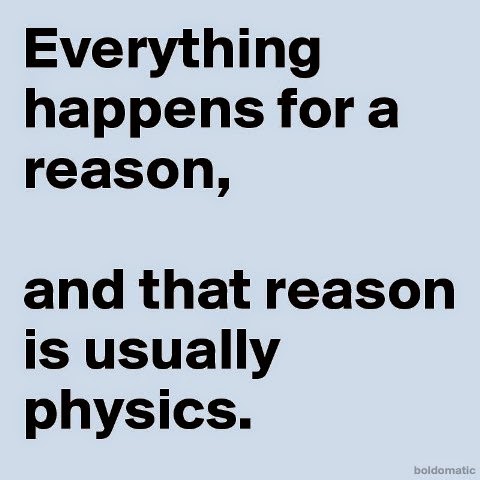 Water flows down stream channels, which aren't often very straight [citation needed]. When the water reaches a meander or bend in the stream, physics steps, and a few important things begin to happen. 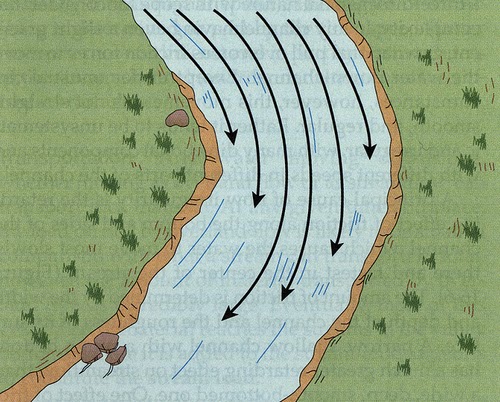 Firstly, as you can see from the above image, the bank on the outside of the bend is where the incoming water "collides" with the bank, resulting in erosion of the bend (rightfully called the cut bank). As you could imagine, this would cause the outside bend to meander outward even more, creating a sharper bend, which would cause the water to erode the bank even greater, and so on. This is called a positive feedback loop, in which A increases B, and B increases A, which goes on forever until something breaks. Once a bend begins in a river, it will grow until it becomes so big it eventually cuts itself off, usually leaving behind an oxbow lake and other really cool landforms.

Secondly, if you imagined the mass of water moving through the stream as a group of runners going around a track, in order for everyone to stay in a group, the person on the outside runs faster than the person on the inside of the turn, as they'd have to run a greater distance to keep up. For the stream, this means that the water flowing along the outside of the bend not only hits the bank more directly, but is also moving faster, which also increases erosion. In contrast, water moving around the inside of the bend slows down. A stream's ability to transport sediment is a result of how fast it is flowing, so the inside of a river bend is where a lot of the sediment is deposited (called the point bar), making it shallow. If you're ever in Alaska panning for gold, this is where the flakes are.

In the end, the different velocities resulting in either deposition or erosion around a river bend means that the channel profile is lopsided. If you were to measure the depth of a river across the channel around a meander bend, it would look like this:


The deepest part of the river is called the thalweg, which is one of my favorite geo-words. It is due to focused erosion from increased stream velocity and the physics of fluids flowing around a bend. When rivers are used as political boundaries, the thalweg is often used to define that boundary. From the air, the thalweg would be drawn like this:

In fairly straight streams, the thalweg is near the middle of the channel, while in very bendy streams it alternates from one bank to the other. This above diagram (specifically the bendy example) is what came to mind when I saw the preferential melting of Minnehaha Creek - the thalweg of the creek is what is melting first. This makes sense, as the water there would be deeper and faster, and therefore more able to transport heat and melt and carry away the ice. In one of the photos, you can even see the thalweg switch banks from one bend to the other:

I think one of the reasons streams are always so cool is because, geologically speaking, they're very dynamic - that is, they change a lot, and in human lifetimes. They're also scale-able, so you can simulate how large rivers form by looking at small rivers, or even making your own in labs. My undergrad geology department had an Emriver, which is basically a large adjustable sandbox with hoses and dyed water. 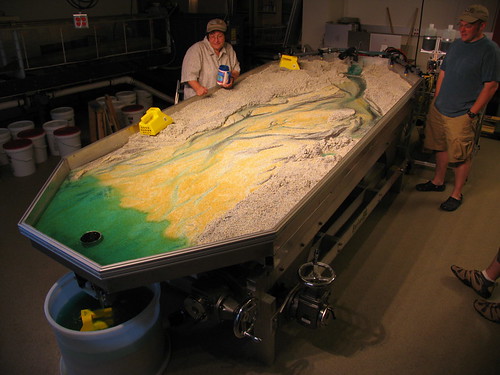 This allowed us to create and destroy our own rivers, and see how changing things like slope and water velocity would reshape the stream. It was always very zen to watch. You can really see the concepts I describe above in action with the formation of cut banks and point bars in this time-lapse video.