For part of a recent dye trace I’ve been searching the area for more springs to monitor. One spring, Patterson Spring, shows up on historical dye tracing records but didn’t seem to be at the location indicated (it was an old dye trace so location coordinates were general; location was listed as being near a bridge crossing the James River, but there are 2 bridges in this area). 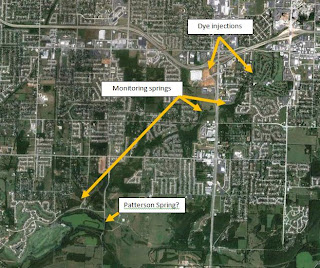 I was feeling especially adventurous so I went down to figure out where the spring really was. There’s a lot of overgrowth surrounding the river and the river has carved a decent valley for itself. 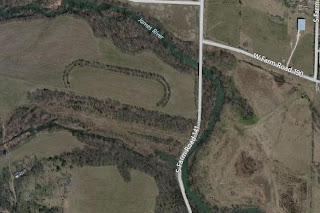 I parked just at the intersection of S Farm Road 141 and W Farm Rd 190 by the northernmost bridge, as the bridge provided a good way to reach the river. Pictured below - my trusty field vehicle. In the background is a good exposure of the rock unit in the area which is prone to caves, springs, and sinkholes (in fact there is a cave within that hillside that was preserved when the highway department discovered it while blasting through to build that road). 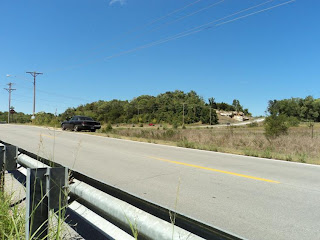 My one regret is wearing shorts instead of pants. Apparently Mother Nature has created her own version of barbed wire in the form of vines with incredibly sharp barbs. Also, the spiders in Missouri continue to amaze me. There is this type of large yellow spider which I’ve seen a number of times while tromping through the woods around here which I’ve been told is nonpoisonous but it provides no comfort to me. It also likes to spin its spider webs at face-height. Photo below courtesy of me (note those are inches on the bottom part of the scale). 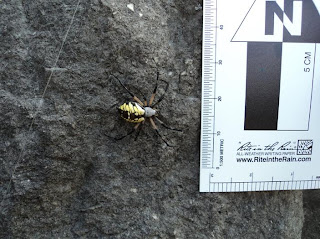 After making it down to the river we began walking upstream as this appeared to look more promising for a spring location. After about 80 feet of walking along the bank I looked down and saw water flowing into the river through a bedding plane in the bedrock. As I wasn’t actually expecting to find the spring so it was exciting to “re-discover” it. 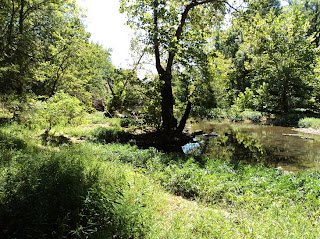 I was too preoccupied examining and recording the location of the spring with my trusty eTrex GPS that I failed to see the “rest” of the spring. 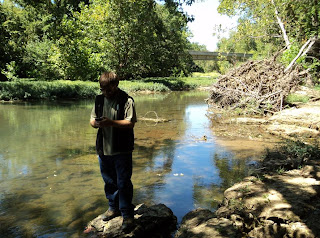 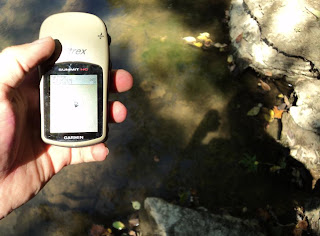 For about 100 feet upstream along the bank of the river there was water coming out of the bedding plane into the James River. It wasn’t a large volume at any given spot, flowing at around 1-2 feet per second, but the “thickness” of the sheet of water flowing out of the spring was about 4 inches, and was around 100 feet in width. Rough estimates of discharge put the whole spring at around 30-40 cubic feet per second, which is considerably more than the other springs I’ve been studying in the area (usually 1-5 cubic feet per second). 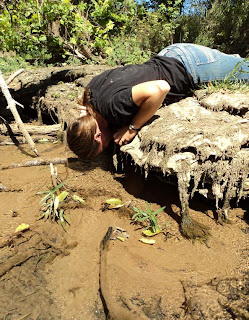 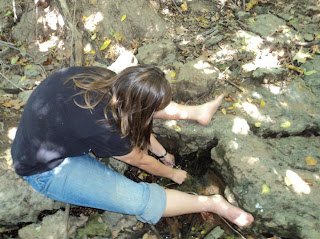 The observation that the water flows out along a widened bedding plane is important to understand for the way water is flowing in the area (it's one of the major research questions I'm trying to address). The river seems to prevent vegetation from growing on a large section of the bedrock and has exposed the fractures in the rock, which allowed us to look down and see the water flowing. These little “windows” were a good place to put a charcoal packet to see if the dye makes it down into this spring. 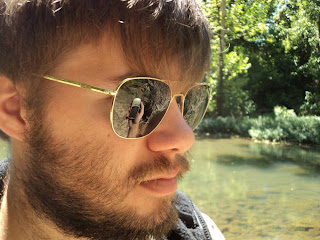