Some of the weirdest ideas come to people that are up way too late and under stress. With that said, it's not a surprise that this following "passage" was the product of taking a Petrology class.

One of the questions asked for a given rock sample is "what is its petrogenesis?", meaning, how did it form, and where did it come from? When given such a loaded question at 2am, the only thing you can do is go off on a complete tangent. The first couple lines were made on the spot between us 3 petrology students that late night, and the rest followed later:


In the beginning, God created the heavens and the magmas. And the magmas were unfractionated and without form.

And God said, 'Let there be Bowen, so that the magma may fractionate, and order be had'. And there was Bowen.

On the second day, He spaketh unto Bowen, 'Seperate the magmas into two series, continuous and discontinuous, so that geologists may spend many hours with petrographic microscopes". And Bowen commanded it so, and there was olivine and anorthite.

On the third day, God spaketh unto Bowen, 'Thou shalst continue in the continuous series of plagioclase, replacing sodium for calcium. The Michel-Levy Method will guide the true of heart'. And there was much rejoicing.

On the fourth day, God spaketh unto Bowen, 'Thou shalst make pyroxene, which is like olivine but more complex and with cleavages' And thus the geologists did rejoice of single-chains.

On the fifth day, God spaketh unto Bowen, 'The geologists have grown arrogant in their memorization. Lo, you shalst create the amphiboles, which are complex with 60-120 cleavage'. And the geologists wailed, and there was much gnashing of teeth.

On the sixth day, Bowen prayed, and said 'I am out of calcium, what shalst I do?' and God said, 'Have faith', and there was albite.

On the seventh day, Bowen said unto God, 'May I have a rest?', and God was displeased with Bowen, and showered him with flakes of biotite and muscovite. And Bowen begged for forgiveness, and continued his series.

On the eighth day, Bowen recovered, his body having been pinched and swelled in tartain plaid. And there was microcline. And God forgave Bowen.

On the ninth day, Bowen prayed unto God, 'But I have nought but silica and oxygen left, what shalst I do?', and lo, God commanded him to take up thine rock hammer, and strike upon the earth. And forth sprang quartz, and God said, 'Its hardness shall be 7". And it was good. 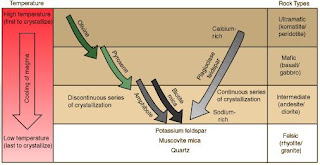