This last spring I had the opportunity to go caving with a great group of cavers in Arkansas. This trip was into Radium Springs Cave in northern Arkansas, sort of a final small event during Hydro Days.

This is one of those great caves that's both large and explorable, but also protected with a lockable hatch, so only certain people are allowed to get in. Even more of a plus, this was not a "show cave", meaning we had no official guide, and we could only see what we shined our flashlights at. 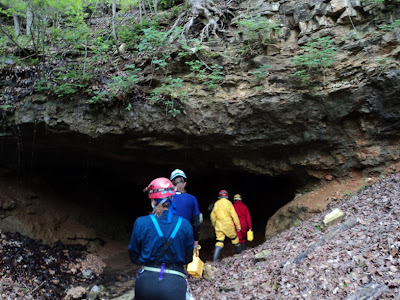 A short walk into the cave we first came to the locked "entrance". This metal hatch was placed over a natural bottleneck. It was quite a small entrance, and a sign to come of the claustrophobic passages we would experience. 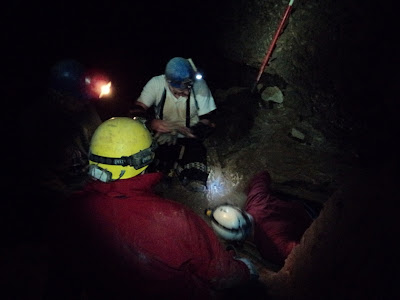 Most of the cave was made of large "rooms" that we would spend a while in looking at really great speleothems and cave structures. Between the large rooms, though, we often had to crawl through very narrow, low, and otherwise unnervingly small passages for long distances (I had to take my backpack off just to fit along this belly-crawl passage below. It went for a good 50 feet, and we went one at a time just incase someone had to back out). Since moving to Missouri I have gone on a number of cave trips, and they all had been building me up to be able to handle this level of claustrophobia. 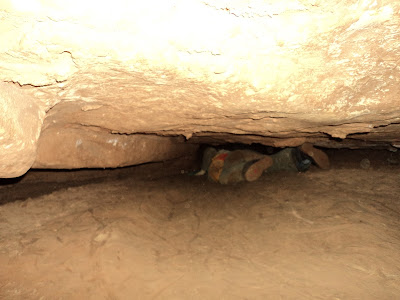 One of the neat cave features are these "boxwork" features, named so because they form these honeycomb shaped features on the cave ceiling which look like old fashioned post office mail sorting boxes. While most ceiling features are formed from calcite dissolution, these are calcite veins from the rock which used to be there. The veins were more resistant to erosion than the surrounding rock, so are remnant features. 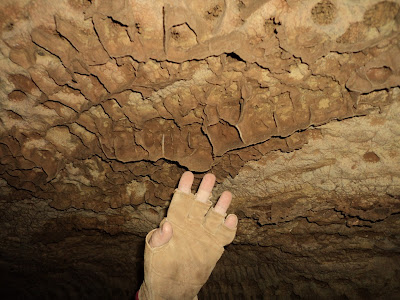 Aside from those, there were plenty of the garden variety cave speleothems, as seen below. Stalagmites are the spikes on the floor of the cave. Stalagtites are the spikes hanging from the ceilings. Where a stalagmite and stalagtite grow together they form a column. The large feature on the left (which I always think look like frozen waterfalls) is flowstone, which is formed the same way as the other speleothems. 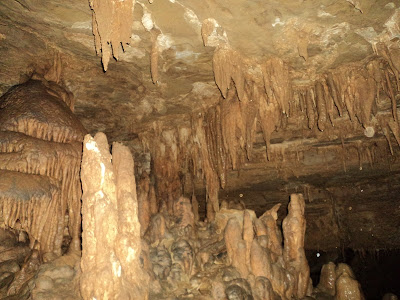 Our group would often stop in some of the larger rooms and take some fairly spectacular pictures. My little camera was nothing compared to some of the great equipment some of us had. 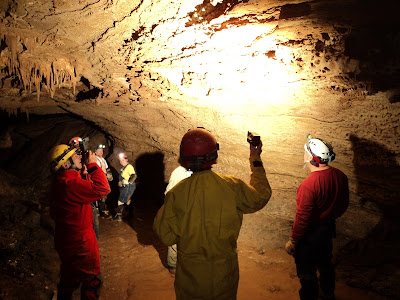 One of the more interesting concepts of the karst bedrock system is the way in which water flows underground in these areas. While traversing through the cave we often had to hop or otherwise tred through small streams. Underground river systems are the norm in these areas. 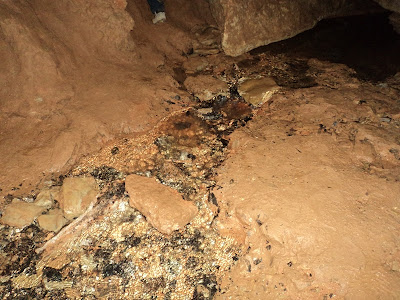 One of the great things about this cave being locked off from just anyone is that vandalism and over-exploration would have probably destroyed some of the more delicate formations. 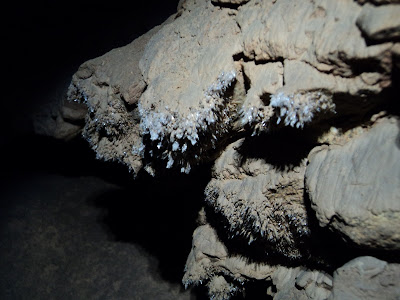 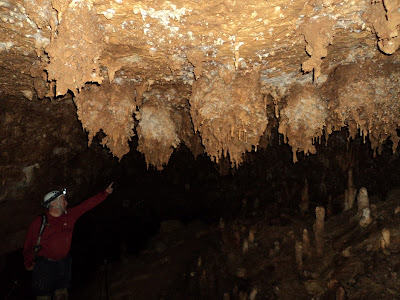 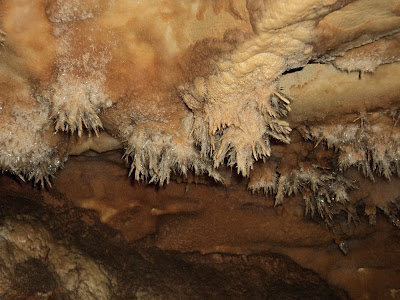 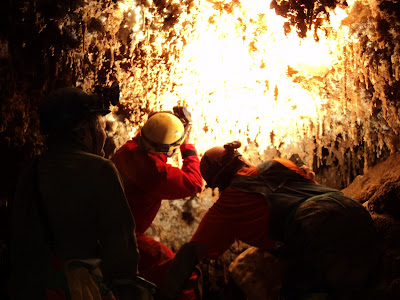 I had been caving before, usually bringing my own headlamp. This was the first time I had been introduced to a carbide lamp. These are flame lamps which are powered by adding little carbide lumps with water in the reservoir of the lamp. This combination gives off a flammable gas which is lit to ignire a small flame. The lever on top controls how much gas escapes and therefore the size and brightness of the light. A little carbide seemed to go a long way, so as long as you had a source of water you had light (handy in a cave). 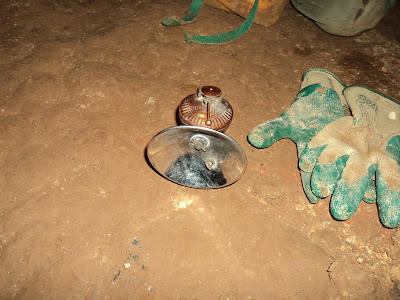 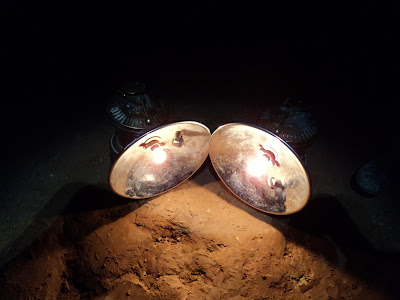 Below, picture of my masters thesis advisor (left) and myself (right). 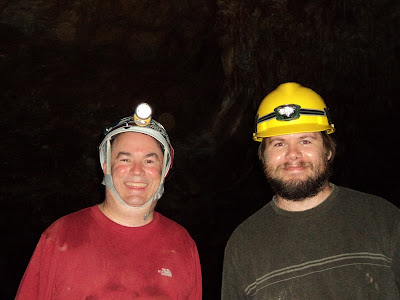 I also had the opportunity to go caving with Dr. Arthur Palmer (below, right), whose textbook many speleology classes use, and is well known in the karst world. Great guy! 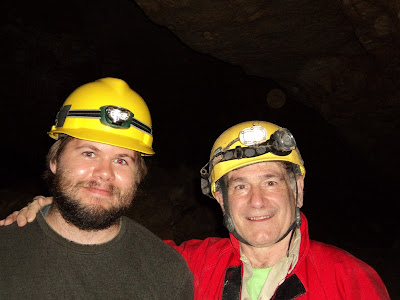 Despite the lack of visible light there was still plenty of life to be found underground. Below, a cave cricket. 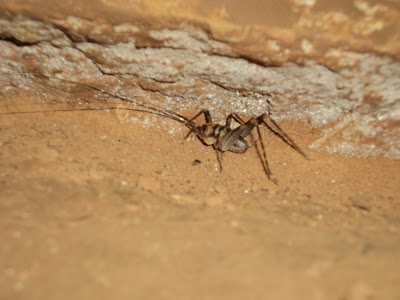 While delving deeper into the part of the cave which is home to a colony of bats we accidentally came across a whole cluster of them. I didn't have time to get a photograph, but I promise there was a huddle of hundreds of bats on the ceiling which became startled to our arrival. 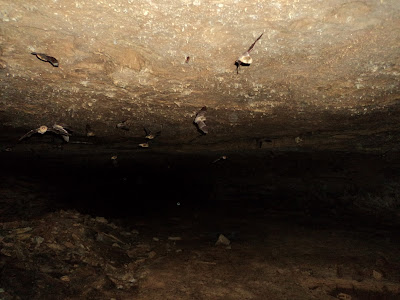 If small spaces wouldn't get you, then maybe a fear of bats might. Personally, bats don't bother me much, but I admit what followed would have caused some issues for others. A piece of advice about bats: if they start flying around, don't freak out. If you stand still and don't move suddenly, they won't hit you. Although I could feel the wind from their flapping wings just barely inches away. 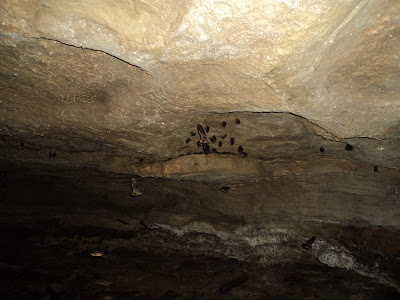 Catching photographs of these bats in flight was not difficult at all. I just kept taking pictures, and there were so many bats flying around that almost all of my pictures looked like these. 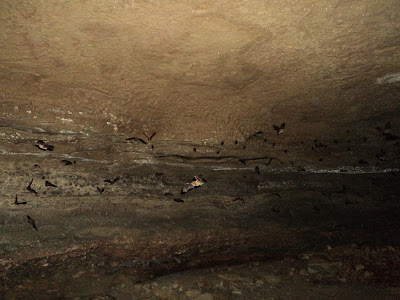 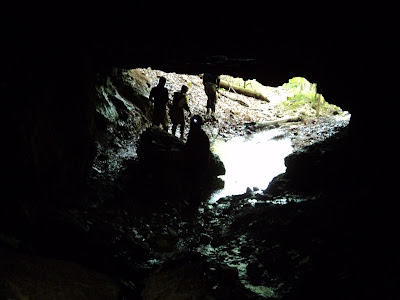 I wasn't sure how large the cave was, but we spent around 3 hours underground exploring, so a good hour and a half both ways. That in itself should give you a good idea about how extensive one of these caves can be.

We finally made it back to the surface. In our absence from the surface world it had begun to rain. I couldn't even begin to guess how much extra cave this water would explore that we were too big to fit. 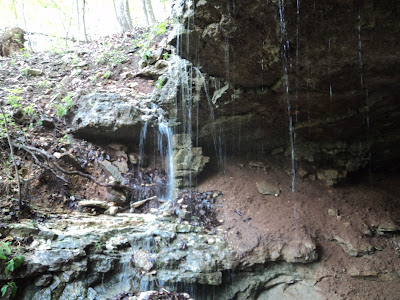