A good friend of mine has been working on a research project to better define the stratigraphy of the Rock Elm Crater in west-central Wisconsin, a crater the result of an Ordovician-aged meteor impact. A characteristic of meteor impacts is a "rebound" of the underlying material, forming a central peak.

Due to extensive erosion that has occurred in the Upper-midwest since the Ordovician (especially recent glaciation), these features are topographically obscurred. Recently, though, a sandstone unit was found where the central peak would have been. Due to the suspected age of the impact, and the local stratigraphy, it's likely the central peak is composed of the Cambrian Mt. Simon Sandstone, a medium- to coarse-grained, poorly to moderately sorted, pebbly, white-to-gray, quartz sandstone, which tends to be cross-bedded towards the top.

My friend was then tasked with comparing this sandstone in the crater to exposures of the Mt. Simon Sandstone elsewhere. Being the basal sedimentary unit throughout the Midwest, buried under hundreds of feet of sedimetary rocks, glacial sediment, or both, outcrops are limited. With the help of a road guide, though, we took a day to go explore some outcrop in Chippewa Falls, Wisconsin, near the rock unit's northern extent (The Mt. Simon Sandstone is named after a hill in Eau Claire, Wisconsin). 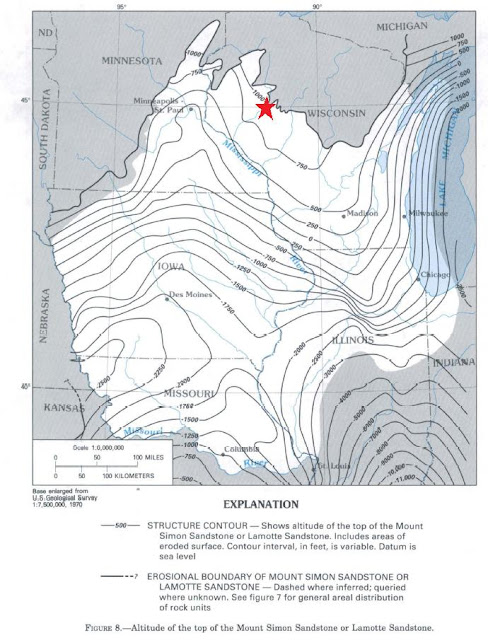 I jumped at the opportunity to see a rock unit which I'd never seen in outcrop before, although I've come across it many times in other ways. During my early undergrad geology years, I had learned about the Mt. Simon being an important local aquifer, since it's the lowest stratigraphic sedimentary unit around. I also learned that its recharge area is around Eau Claire, Wisconsin (right next to Chippewa Falls), which makes sense considering it outcrops around there. I started working as a hydrologist for the state a few months ago, and I've already had to model groundwater flow through the Mt. Simon, so I've seen it before...in well records, usually a few hundred feet down. Most of my work has been along its north-western edge (in south-central Minnesota), the edge of the Hollandale Embayment, which the Minnesota DNR recently finished a report on to better define the western edge.

I've seen the Mt. Simon's stratigraphic equivalent during graduate school in Missouri - the Lamotte Sandstone. The Lamotte outcrops around the St. Francois Mountains (which I've described in a previous post). Around Springfield, where I went to school, it was fairly deep (I don't recall the exact depth, but must have been close to 2000 feet below surface). It's not used as an aquifer in that area - it's too deep to be practical, so there are aquifers above it to use, and it tends to be saline. A few friends of mine did their graduate research on an ongoing study to use the Lamotte Sandstone as a carbon sequestration reservoir.

This trip took us to Irvine Park, where the Mt. Simon Sandstone is exposed along the banks of Duncan Creek. The outcrops were surprisingly easy to access, being just off of the footpath that crosses the creek.  We did have to trudge through some snow, but it is February, and this is Wisconsin.

The first thing we did was ignore the signs.

The most noticeable feature of the sandstone, even from a distance, was the cross-bedding. Cross-beds are structures formed from sediments being deposited at an incline; either underwater from ripples and wave action, or on dry land as dunes. A group of inclined layers is called a "set". This is one of those few cases in geology where the apparent tilting of beds isn't the result of the beds being deformed - they were deposited at that angle. The boundary between the sets is nearly horizontal. The sets here ranged from a few inches to a few feet thick.

﻿
Cross-bedding is useful because it gives an indication of both the direction and intensity of flow when the sand was deposited. This all translates to an understanding of the environment in which it formed.


My friend noticed that the orange layers tended to be coarser than the lighter layers.

As we went along we came across an area where the grain sizes became more divided between either fine or coarse grained. The fine grained sand appeared lighter, while the coarse grains were darker and mixed.

This location provided a pretty good way to check out some textural variation in the Mt. Simon, and provided some great examples of cross-bedding. The literature description of this rock unit matched what we saw - a fine- to pebbly, cross-bedded sandstone. These tended to look fairly similar to some exposures of the Lamotte Sandstone I remember seeing in Missouri. Hopefully this provides some useful information for determining the stratigraphy in the Rock Elm Crater.

We also saw a frozen waterfall! 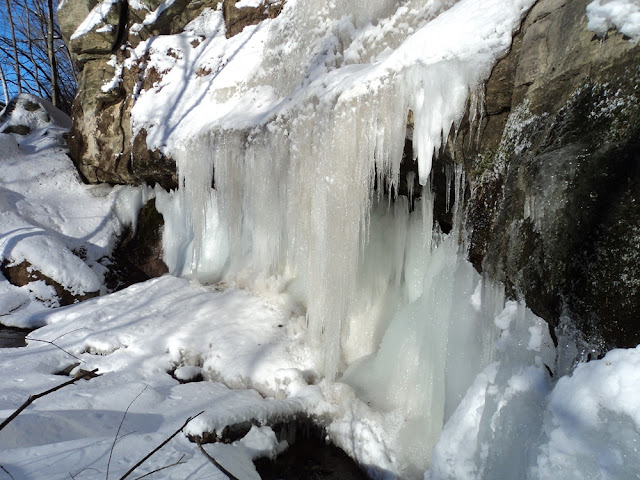