My family recently went on a trip to Mexico – more specifically, Cancun, in the Yucatan peninsula. 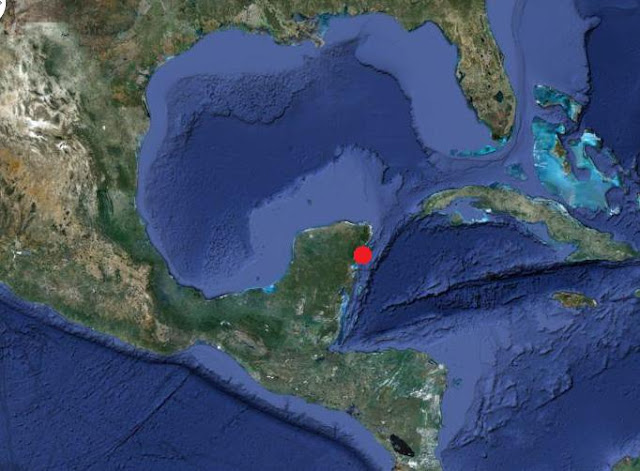 We went back to a resort we had gone to two years ago for my brother’s wedding, and had liked it so much, we decided to go back. Although I enjoy the whole sun and relaxation thing, ever since I discovered the world of geology (pun!), every new place I visit I appreciate the “place” as much as the “vacation” (Oh god, I sound like a geographer…).


Trips to tropical seas are always interesting for geologists, especially those that ever studied limestone (limeston forms in shallow tropical seas). I went to graduate school at Missouri State, and my research focused on local rocks, which was basically…


Limestone is the dominant rock type around where we stayed in Mexico. The difference between the limestone in Mexico and the limestone I’ve usually looked at is the age:

Geologically, the limestone around Cancun is very young. The environment in which the limestone formed is not much different than the local environment there now. This is not the case for Missouri and Minnesota, which are (unfortunately) no longer home to shallow tropical seas. It’s always fun to connect the locations together geologically, separated by time; Missouri and Minnesota used to look like Cancun, and someday Cancun may be hundreds of feet above sea level with hobbit-like Midwest weather (which I got to escape from for a week).


Although we could have contentedly never ventured out of our all-inclusive resort, some of us wanted to go exploring. Our options were to check out the Mayan ruins of Tulum, or do some snorkeling. The snorkeling involved two parts – in the ocean, and in some caves. I was sold on the cave snorkeling. Besides, I figured I could come back and see the Mayan ruins some other day, unless the world ends in 2012 (awkward).

Cenotes are collapse sinkholes which are filled with groundwater. Sinkholes typically come in two flavors: 1) “Slump” sinkholes, or soil depressions formed from soil being siphoned into an underground passageway (think of the dimple that forms in the sand of an hourglass), or 2) “Collapse” sinkholes, an open hole that forms as the roof of a near-surface cave suddenly collapses (this is the type that's been in the news a lot lately, attacking people while they sleep). Since the cave can form deep underground and slowly grow closer towards the surface, when it does finally collapse, it will suddenly reveal a large open cavern. Often, these caverns are connected to other caves or cenotes through smaller passageways. Knowing this, you can’t help but look at all the solid rock around you and realize it’s all basically Swiss cheeserock.

After snorkeling with some turtles in the ocean, we headed to the cenotes, involving a little walk through the jungle. One thing our tour guide talked about which I really liked was that of the motmot bird, named for its distinct call. While walking on a trail to one of the cenotes, we saw a motmot flying between the trees ahead of us. These birds are known to specifically hang around cenotes. When the Maya would travel through the jungle, they could listen for the motmot’s call to guide them to a source of water.

The cenote first appears to be a small pond randomly in the middle of the jungle.

Once we got into the water (which was MUCH colder than the ocean), we began to explore, and on one side of the pond, went into a cave system. Although we were very close to the ocean, the water here is freshwater, although in some places you can get the freshwater mixing with saltwater. We also encountered a few scuba divers while we were snorkeling around - there was plenty of cave passage for them to go into.


We also encountered this tree…well, the roots of it, actually…while in one of the cave passages. At first I thought they were some kind of strange speleothem, but getting closer we saw they were tree roots. Each root came down through the cave ceiling in what looked to be a perfectly sized hole for each root. I had known that roots can pry rocks apart, but these didn’t always look that way. We were told by the tour guide that the roots release a type of enzyme which dissolves the limestone away. By doing this, the roots can grow downward and reach a source of water.